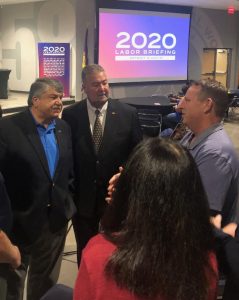 Tyner, a 12-year Delta flight attendant based in Detroit, educated the audience on Delta’s heavy-handed efforts to prevent Delta workers from attaining the right to vote on IAM representation. She spoke eloquently describing how flight attendants who support unionization are routinely targeted and terminated by Delta management. Tyner told a shocked audience about how a pro-union single mother of five was placed on an 18-month “last chance” probation by Delta management after being absent from work due to cancer and then being terminated for an ensuing small infraction.

Hamilton, a four year “ready-reserve” ramp worker spoke of similar anti-worker treatment and told attendees how tough it is for him to meet his financial obligations due to Delta capping the hours he can work, offering no health insurance and the limited opportunity to gain full-time employment.

AFL-CIO President Rich Trumka reiterated the support of the 12 million plus AFL-CIO for the IAM Delta campaigns and demanded that presidential candidates level the playing field to make forming a union easier and free from interference.

DNC Chairman Tom Perez addressed the attendees and stated he was inspired by Masayo and Andy’s comments and urged them and their co-workers to keep fighting for IAM representation.

The AFL-CIO Labor Briefing was organized so the DNC could hear directly from workers and their unions about the issues that matter most to them. The IAM invited Delta workers because of the Machinists Union’s commitment to fight for workers to organize free from company interference.