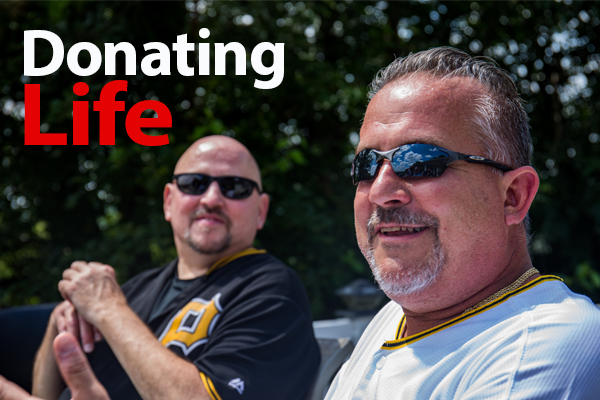 It was 4 a.m. when Michael Bukta rose from a deep sleep with a voice telling him to go see his friend Chuck.

Having never experienced anything like this, the IAM Transportation Department member of Pittsburgh Local 1044 knew he had to act.

“I’m a God-fearing man,” said Mike. “I’ve heard of it happening to other people, but not me.”

Although his friend had adamantly refused in the past, Bukta knew this time would be different.

Mike’s friend Chuck Davis was not doing well. His kidney function was nearly nonexistent and he had been on dialysis for nearly two years. It was taking an exhausting toll on his mental and physical health.

“Being on dialysis is a very rough process,” said Chuck. “You have no life. You have no energy. It’s a struggle just to do any normal task, so it’s very rough physically and emotionally.”

The two men have known each other since grade school. After graduation, Mike moved to Virginia to take a job
with United Airlines at Dulles International Airport.

They were friends through school, but it wasn’t until Mike transferred back home to Pittsburgh that the two became close.

“His girlfriend and my wife were best friends, so we ended up hanging out a lot and got to be closer friends,” said Chuck.

Living with Type 1 diabetes since age 6 has left Chuck with a long list of health issues. He is partially blind, and has previously undergone a pancreas and kidney transplant.

The kidney he received from a family member 14 years ago began to fail, forcing him to start dialysis again. Chuck decided he didn’t want any friends or family tested to be possible donors. He would wait for a cadaver kidney.

“I watched him get weaker and weaker,” said Teresa. “The longer you’re on dialysis, the weaker you get, your heart and other organs weaken and you have a chance of your organs shutting down.”

A person with kidney failure can sustain on dialysis for only a set amount of time; it’s not a permanent solution.

“He’s a very proud guy,” said Mike. “Chuck would tell me he was feeling fine, but I could tell he was struggling.”

Mike’s girlfriend, Dianne Hall, endured the highs and lows along with Teresa. At their annual Memorial Day cookout, she remembers consoling her distraught best friend.

“I just let her know that it’s going to be okay, not knowing how,” said Dianne. “My faith was so steadfast, I just knew it was all going to work out.”

Davis would spend three days a week, traveling an hour each way, to receive his four-to five-hour treatments, leaving him exhausted for the following day.

“I could see his health steadily decline,” said Teresa. “I didn’t know if I was going to have him for much longer.”

“I just didn’t want to put anyone in harm’s way,” said Chuck. “God forbid something happen during or after surgery. My life is not any more important than his.”

Nearly 20 years’ experience as a union committee person and shop steward prepared Mike for the ultra-personal negotiation session with his friend.

“When Chuck reluctantly half-opened the door that morning, he wasn’t going to buy what I was selling,” said Mike. “Little did he know, I had someone else on my side.

“Being a steward helped me understand people better and see their needs, even when they didn’t want me to.

That negotiation was probably the most important of my whole life.”

The emotional two-hour conversation helped crack Chuck’s hardened shell. After a few weeks of pondering his health and future, Chuck and Teresa went to visit Mike and Dianne. 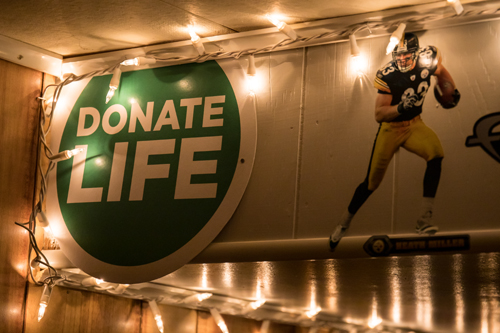 All four sat down at the table, Chuck reached out, grabbed Mike’s hands and looked him in the eyes.

This began the stressful and emotional roller coaster ride for both families.

The process of donating an organ is very extensive. Donors must be a total match to the recipient plus their organ and body must be healthy enough for surgery and continue to be healthy in the future.

“I underwent two full days of rigorous testing,” said Mike. “I prayed a lot and worked hard to make sure I passed the physical and stress test. They really put me through the ringer, but I made it through.”

The final part of the testing process is to mix the blood of both parties to ensure the organ will survive in the recipient. Unfortunately, Mike’s blood did not respond well due to the antigens in Davis’ system from his previous transplants.

Chuck would not be able to receive Mike’s kidney.

“You feel a sense of failure and sadness,” said Mike. “It didn’t last long. Our phenomenal surgeon told me I had the option of joining the national donor registry. If I agreed to give my kidney to someone else, it would assure that Chuckie would get one.

“I agreed. And it was the best decision I have ever made.”

Within a few weeks, a donor was found.

“I got the call they found a match,” said Mike. “They call me first to make sure I’m still in, because without me they wouldn’t give a kidney to Chuckie.”

The surgery was scheduled. It was going to be an eight-person kidney swap with people from all across the country.

But the next call was a letdown. One of the donors was not able to follow through. All eight surgeries were off.

More than 500 miles away, Lenny Zwig and his son were about to leave for the Milwaukee Brewers’ opening day game when his wife, Becky, asked him to take off his Brewers’ shirt and wear one she ordered for him. It was a “Share Your Spare” shirt with Zwig’s blood type and contact information.

While at the game, the shirt was put on the jumbotron and shared on social media. The posts went viral, garnering a lot of media attention, and before long, Zwig was contacted by 24-year-old school teacher Emily Nowak. Moved by his story, she wanted to be his kidney donor.

Nowak endured the testing process and was a perfect match. She would be Zwig’s provider for a new lease on life. As the surgery date neared, transplant doctors called off the procedure due to fears of her kidney being too small for a man of Zwig’s 6-foot-4-inch, 235 pound stature.

Not one to give up, Nowak volunteered to go on the National Kidney Registry and give her kidney to anyone for Zwig to get one in return.
Similar to Mike’s donor situation, Nowak had no idea who would receive her kidney.

Three days after the last cancellation, Mike received yet another call. They had found a perfect donor match for Chuck, and needed to know that he was still willing to donate his kidney to a stranger.

“Of course I was in,” said Mike. “I was excited, but we all were afraid of being let down again.”

Unbeknownst to them at the time, the match for Chuck was Emily Nowak.

“They had a match for Chuckie, but they have to find someone for me,” said Butka. “Because part of the deal
was I had to donate mine in order for him to get one.”

It didn’t take long to find a match for Mike. His match was the now-famous Brewer-fan-in-need-of-a-kidney, Lenny Zwig.

“You have two people in Milwaukee who want to help each other, but can’t because of the size, and me and Chuckie in Pittsburgh who can’t, but in the end we all match up,” said Mike. “I’m a God-fearing man, and this is how He does business.”

On November 2, 2018, four surgeries were performed. Two kidney removals in the morning — one in Milwaukee, one in Pittsburgh. They crossed in the sky on their way to their new owners.
That afternoon, Chuck and Zwig were recipients of new kidneys, which will hopefully provide years of good health. 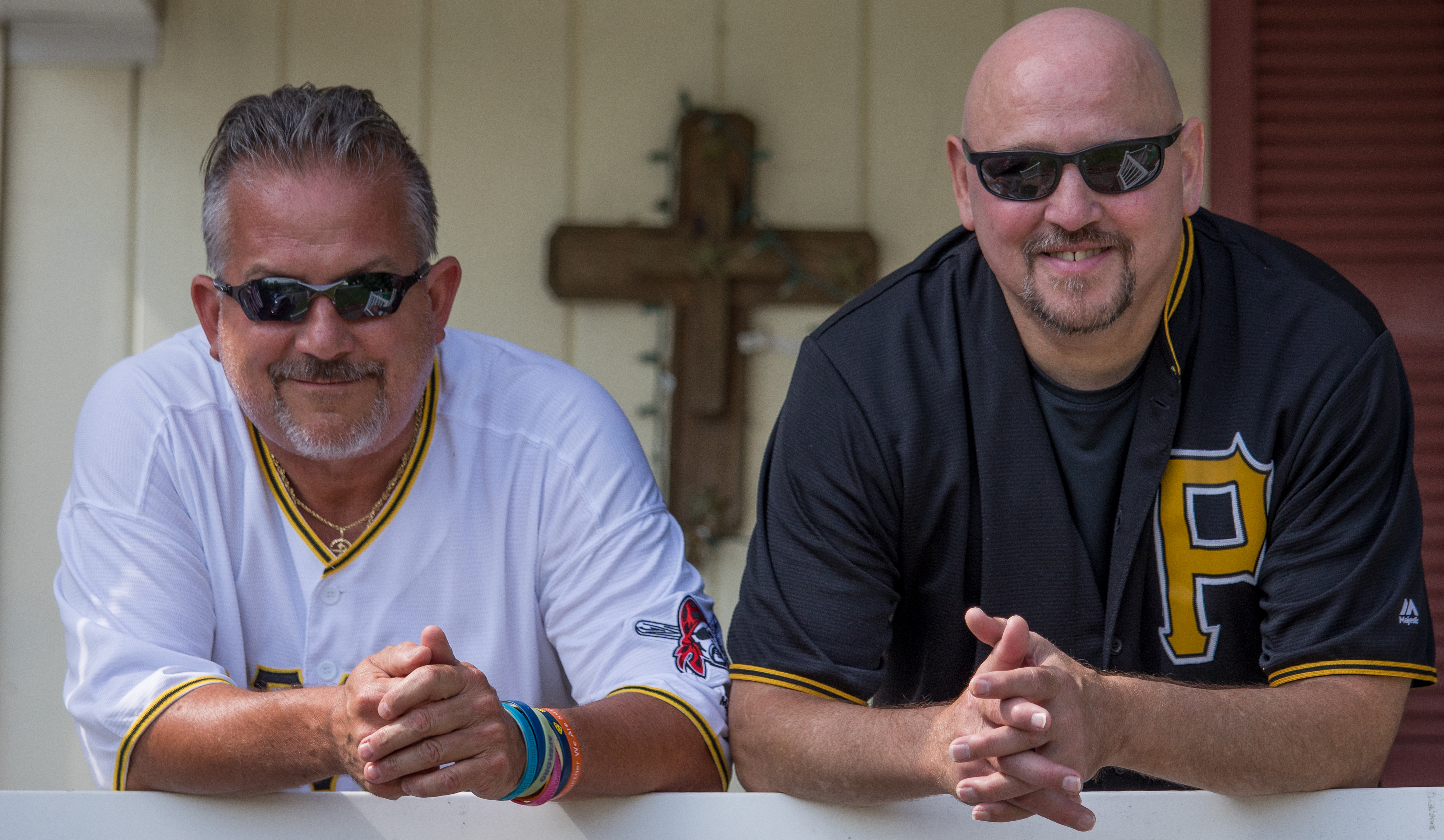 Today everyone is recovering, getting healthy and doing well.

“I’m doing great now,” said Chuck. “I have energy to do things that were impossible when I was on dialysis, like going kayaking, camping and fishing.”

“I can watch him do things he couldn’t do for years now,” said Teresa. “And smile while doing it.”

“He’s back to the same Chuckie,” said Mike. “Except now when I ask him how he feels and he tells me ‘great’ — I know it’s an honest answer.”

Mike stays in constant contact with Zwig, who is enjoying his newfound health.

“Lenny is healthy and vibrant,” said Mike. “He’s working on his farm and enjoying his family. To see the look on his wife’s face and his children’s faces, it’s just priceless.”

All four have formed an unbreakable bond. Once strangers, the crew from Wisconsin are now family to Mike and Chuck. They have been able to meet up individually but have yet to all be in the same place at the same time.

“We just long for the day where all four of us can get together,” said Mike.

For obvious reasons, Bukta has become an advocate for living organ donation.

“I just wanted to help a friend, but the journey has led to so much more than that,” said Mike. “I was not only able to get my friend a kidney, but was able to save someone else’s life.”

Those sentiments are backed-up by his life-long friend.

“Anybody that is willing to donate and save a life has to be a special person,” said Chuck. “I encourage anyone considering it to talk to a person who has received an organ and is still living because of it.
“I am here today because Michael stepped up to the plate and donated his kidney to save my life.”