In recent years, Upstate New York has been hit with economic uncertainty, a multitude of plant closures and the deadly Coronavirus pandemic. Despite obstacles IAM District 65 has persevered and is celebrating a big win after organizing migrant workers south of Rochester.

“This was about dignity and respect in the workplace,” said IAM District 65 Directing Business Representative Ron Warner. “It’s awesome.”

In late 2020, the District won an election to represent seasonal employees at Seneca Foods in the small farming community of Leicester, NY. It was a successful organizing campaign that required around the clock attention, unique cultural engagement and strong organizing skills under the cloud of COVID-19.

“Any shot in the arm we can get that keeps us going makes us feel good and keeps us fighting the fight out there,” said District 65 Business Representative and Organizer Rick Dahn. “It makes me want to go out there and do even more.”

The new collective bargaining unit, which has at least 190 employees, is 90% Puerto Rican. Each year many leave the island for at least six months and travel to Upstate New York. Some employees have done this for decades. Upon arrival, they process and can beets and carrots at a giant production plant owned by Seneca Foods. The operation is one of the company’s most profitable, with hundreds of tons of produce being processed on a daily basis. 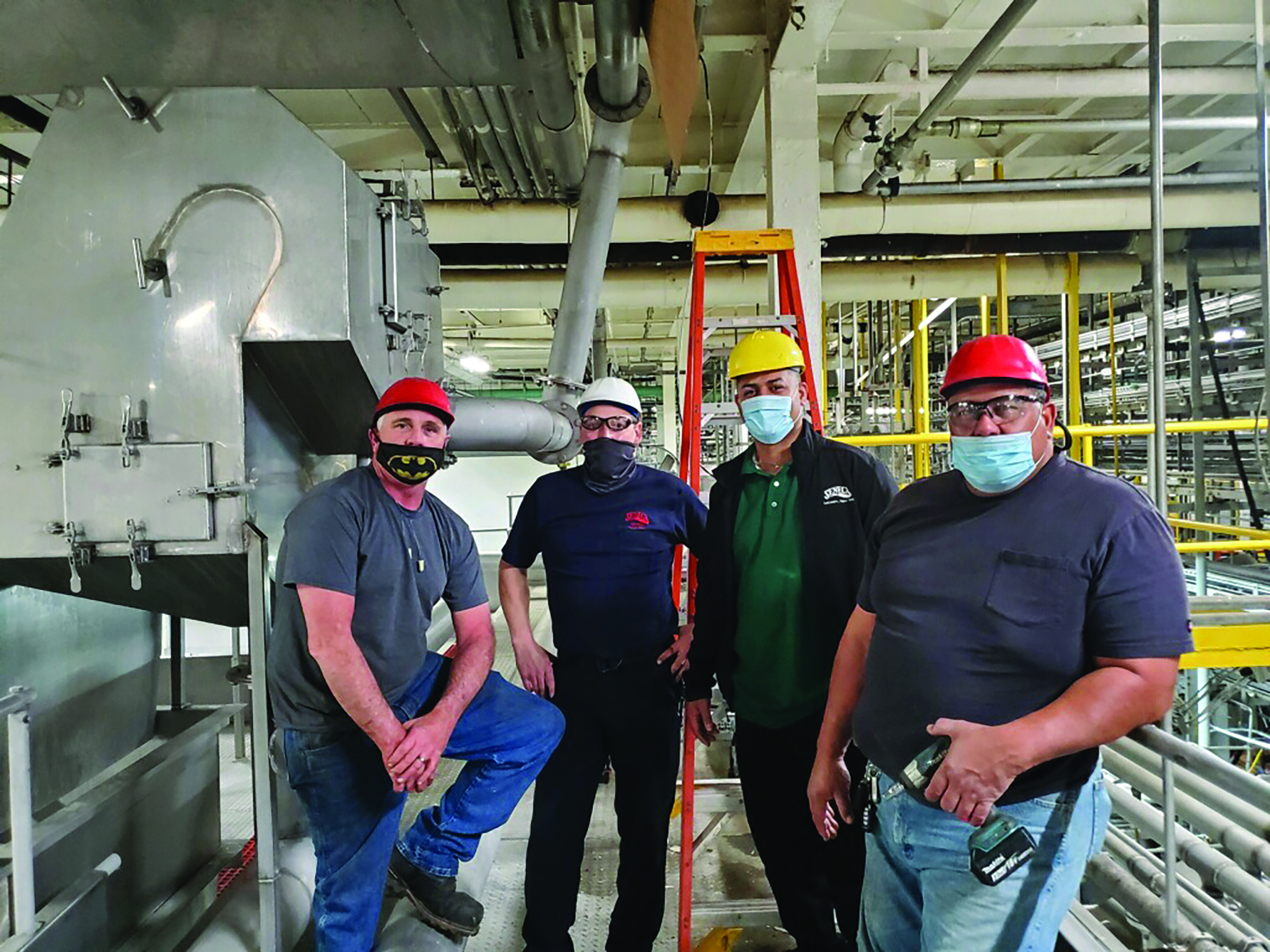 These Machinists Union members keep the equipment and the facility at the Seneca processing plant running smooth. (From left to right) Chris Bell, Drew Reniff, Luis Diaz and Rafael Pena.

“They typically bring them up at the end of June. They usually start production after the 4th of July and they run through the end of November,” said Warner, who has climbed the ranks of the IAM since 1986. “They have been doing that constantly for about the last 10 years because of the yield and amount of product. It’s amazing to see truck loads and 18-wheelers full of vegetables.”

Thirty-seven-year-old Melissa Pena Cora, a migrant from Arroyo, Puerto Rico, is one of the seasonal employees who will now be represented by the IAM. She and her husband moved stateside about a decade ago. They currently reside near the plant and are raising two teenagers, ages 19 and 15. In her spare time she loves traveling and cooking tasty cultural cuisine.

Pena Cora is the family’s breadwinner because her husband of 19 years is not working. She says she was attracted by the IAM’s reputation for bargaining lucrative contracts.

“When I heard about it I wanted it right away. The union protects the employees,” said Pena Cora. “I like it because we will have more benefits and everyone will be treated equally. I think we are going to see change. The union will push the company to do the right thing.”

Pena Cora talked to her husband, who’s a labor supporter, about joining the IAM. That discussion gave her confidence in the Machinists Union and she’s looking forward to becoming a member.

“I can’t wait to start working and see how things are going to go,” said Pena Cora. “I feel things will be better.”

The seasonal employees at the plant first contacted District 65 representatives in June 2020 after workers became frustrated by management’s poor treatment.

“You don’t talk down to them and you don’t yell at them,” says Warner.

The seasonal workers also say their status as at-will employees can easily result in lost wages and cut hours.

“If the company deems that they don’t need you that day, then you’ll just sit there and won’t get paid,” says Dahn, a 40-year IAM member. “These are terrible conditions.”

Some employees allege living conditions at an encampment near the vegetable cannery, which they pay the company to use, has missing doors, minimal washers and dryers and cramped spaces, a concern amid COVID-19.

“They were very enthusiastic and very interested in turning the page and getting treated fairly,” says Dahn. “We shouldn’t have these type of conditions anywhere in America.”

The organizing campaign gained significant momentum in late summer. The IAM, which already represents 40 full-time mechanics and electricians at the Seneca Foods plant, was assisted by that bargaining unit’s Shop Steward, Luis Diaz, a Puerto Rican migrant who has been a member since 2018. 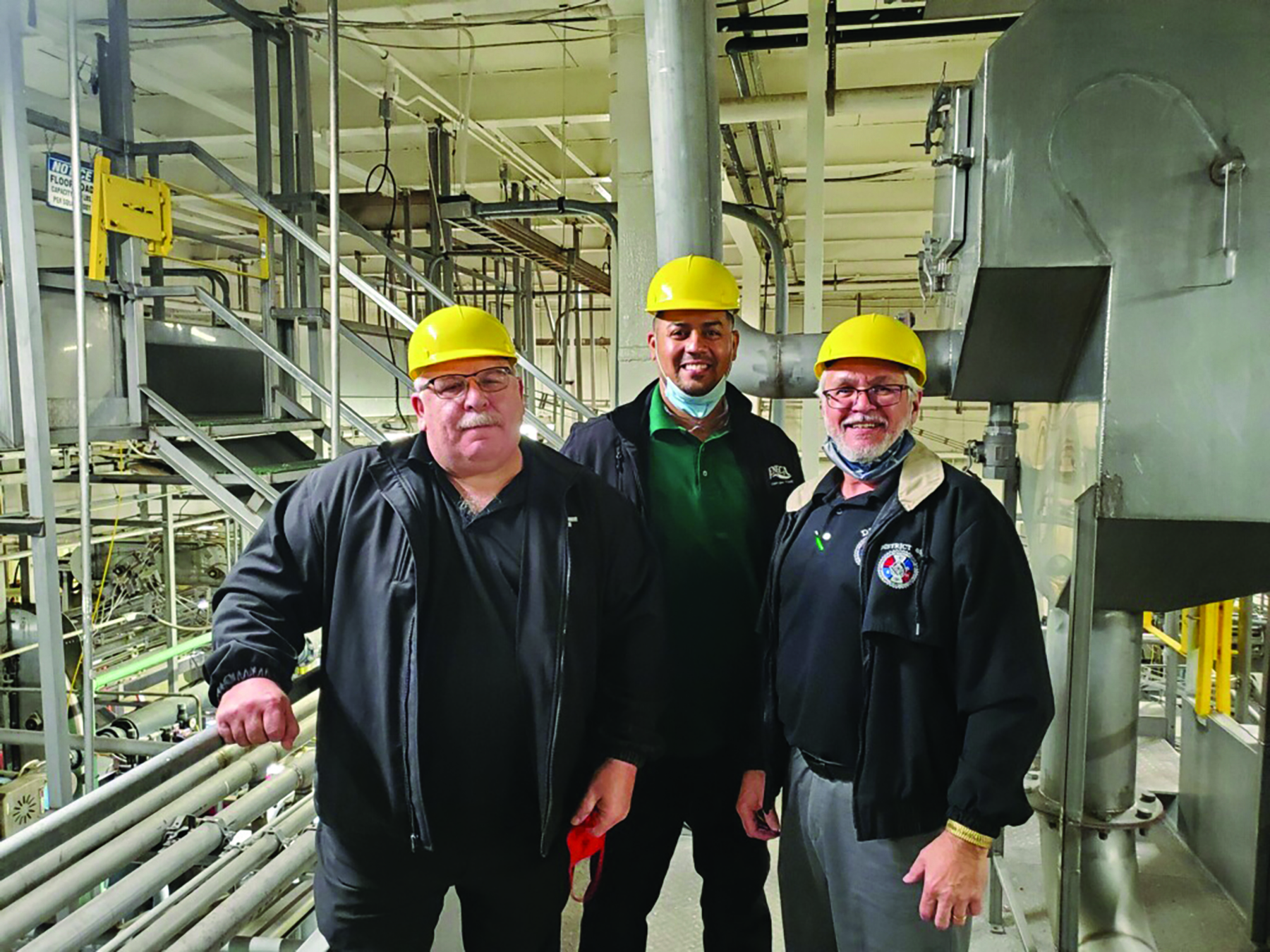 “I was here talking to people and asking them about unions,” said Diaz. “Most of the people said they would love to join the union. I feel happy to help my people.”

Diaz’s relationship with the seasonal workers was crucial. His constant interaction with them helped the IAM gain their trust and respect, rapport on the shop floor that drew a flurry of signed authorization cards.

“Folks were very happy to see us. There was an unbelievable amount of support,” said Warner. “It was amazing to see these people so energetic when we showed up. They were smiling, laughing and giving thumbs up.”

By fall, District 65’s organizing campaign gained steam with the addition of Juan Negron, the IAM’s Eastern Territory Chief of Staff. Negron, a union member since 1987 and native of Santurce, Puerto Rico, encouraged the District to file with 30% of the unit. During this time he and the team crafted handbills in Spanish and personally met with workers off-site. At times, Negron and the District would spend hours engaging the seasonal workers and learning about the individual needs, lives and families of each prospective member, a task based on teamwork and trust.

“I said those are my people and I needed to talk to them,” says Negron. “By knowing the culture of the people, knowing the lingo, knowing the wording that you say to people, you make a connection with them right away. We were victorious.”

A key selling point came when Negron told the workers about the IAM Disaster Relief Fund, which financially assisted union members in 2017 after Hurricane Maria battered Puerto Rico. The deadly Category 5 storm killed more than 3,000 people, some of whom were relatives of seasonal workers at Seneca Foods. Weeks later Negron travelled to the island on behalf of the union and distributed emergency checks to IAM members, funding that had been donated by concerned Machinists.

“We told them what our union did for our members there. They were shocked,” says Negron. “It makes you feel good as an organizer.”

As the organizing campaign continued, the IAM increased visibility, hand-billing, texting and in-person communication, an operation that required nonstop attention.

“Some nights I can remember getting calls at 11 o’clock at night and there would be texts at 3 o’clock in the morning,” said Warner. “We worked hard.”

District 65 was able to organize while adhering to safety protocols associated with COVID-19. Staff used caution and practiced social distancing, a unique challenge given the personable nature of organizers.

“It was an unbelievable win in a very hard environment,” says Warner. “People want to see your face. They want to look in your eyes. They want to know you.”

At one point, the State of New York became a hotspot for the Coronavirus pandemic, with more than total 51,000 deaths reported thus far. But the IAM remained vigilant and pushed forward with the organizing campaign.

“Normally it would be tough enough, but it was extremely challenging in these conditions,” said Dahn. “It was different from beginning to the end.”

Organizers also weathered a tough anti-union campaign that included captive audience presentations and propaganda. But on November 13, 2020, 60 percent of the seasonal workers at Seneca Foods voted in favor of joining the Machinists Union and are now preparing for a first contract.

“The more you get people working together the better it is,” said Dahn. “It was a team effort.”

The post IAM Bringing Justice on the Job to Puerto Rican Migrant Workers in New York appeared first on IAMAW.