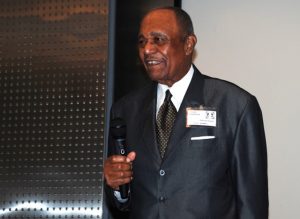 Robinson, the first African American to serve in that role for the IAM’s political arm, was a 57-year life member of the IAM.

“Earl Robinson lived a life of service to countless IAM members, their families and working families everywhere,” said IAM International President Robert Martinez Jr. “We are forever grateful to him and his family for their dedication to our collective cause for dignity, justice and respect on the job. On behalf of the IAM Executive Council and our entire membership, we send Earl’s family our thoughts and prayers during this difficult time.”

A veteran of the U.S. Air Force, Robinson joined IAM Local 15 in Houston as an employee of Cameron Iron Works in 1962.

He would become involved with the IAM as a shop steward, United Fund solicitor and co-chairman of MNPL. He was also a member of the A. Philip Randolph Institute national executive committee, the Coalition of Black Trade Unionists and a co-chairman of the Texas AFL-CIO Black Affairs Committee.

Robinson served as MNPL Assistant Director from 1974 until his retirement in 2001. From 1970 to 1973, Robinson was a staff organizer with the AFL-CIO’s Industrial Union Department.

“I am and always will be a part of the Machinists family,” Robinson said at a Black History Month event at IAM Headquarters in 2014. “This organization makes sure so many children around the country have dinner on the table every night.”