“Myself and this entire Executive Council are proud of this Local Lodge, this community and all of you for your perseverance,” said IAM International President Bob Martinez during a recent tour and visit with members of IAM Local 1202 at the Henry Pratt plant in Aurora, IL.

Local 1202 members at Pratt fell victim to a mass shooting which claimed the lives of five people in February 2019. 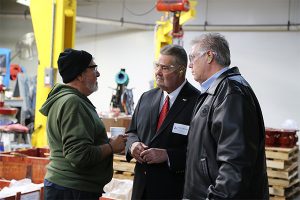 “It was my honor to walk the shop floor and meet many of you today at Henry Pratt,” said Martinez later at the IAM Local Lodge 1202 meeting. “I am not here to relive the tragedy that struck our union on February 15th, 2019. I know the pain from that day is still very real for many of you. I feel your pain. This entire union feels your pain. We will forever mourn the lives of Russell Beyer, Vicente Juarez, Josh Pinkard, Clayton Parks and Trevor Wehner.

“I am so incredibly proud of your resilience and strength. Each and every one of you exemplify what it means to be a Fighting Machinist.”

Martinez and Galloway presented the Beyer and Juarez families and Local with two plaques and service pins honoring the lives of Russell and Vicente.

Inscribed on Russell Byer’s plaque were the following words:

“A selfless and kind soul who by word and deed served as a leader for his IAM Brothers and Sisters. Russ was quick to defend any member who needed him. He will be remembered for always standing up for what is fair and just.”

“A hard-working and compassionate IAM Brother who was well known for his humor and likability. Vicente was a true family man who took pride in his work. He cared deeply about the wellbeing of his IAM Brothers and Sisters.”

A third plaque was presented to IAM Local 1202 member Timothy Williams, shot three times during the shooting, but still managed to alert and save the lives of his fellow IAM brothers and sisters.

“Without hesitation, you risked your own life so that others could make it home to their families on that fateful day,” said Martinez to Williams. “Those you saved will always remember what you did for them, and your union is eternally grateful.”

GVP Galloway also praised Local 1202 members for their resilience in the wake of the shooting.

“They say tragedy is life’s greatest adversary,” said Galloway. “That when faced with adverse or unfortunate events, all you need is hope and strength. Hope that it will get better. And strength to hold on until it does. I can tell you that after what I’ve seen and heard in talking to many of you today, I’d add that faith goes a long way, too. What I saw today on the shop floor and what I see right now in this room is faith – personified.”

“I am in awe of my brothers and sisters at Henry Pratt,” added Jones. “It has been my privilege to witness the recovery of our people. The way they have coalesced in spite of such horrifying circumstances shows the true character, strength and resilience of these men and women.  I am proud to represent them and a better person for knowing them.” 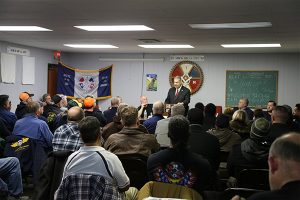 IAM International President Bob Martinez addresses members at the IAM Local 1202 meeting, where he presented the Beyer and Juarez families and Local with two plaques and service pins honoring the lives of Russell and Vicente. A plaque of heroism was presented to IAM Local 1202 member Timothy Williams.

Immediately after the shooting, Martinez deployed, with assistance from the IAM Transportation Department, several members of the IAM’s Critical Response Team (CIRT), which helps IAM members and their families deal with the mental side of tragedies like this one. CIRT was on the ground and assisting IAM Local 1202 members within 24 hours.

Martinez later mandated training members from each Territory to serve on CIRT teams across North America.

In addition, together the IAM and the Aurora community raised over $1 million for the victims’ families.

“During my tenure as President of Local 1202 I have developed a close relationship with our members at the Henry Pratt Company,” said Johnson. “There is no doubt that we have all been tested through this tragedy, but time does heal and its showing as all of us and our brothers and sisters at Henry Pratt pull together to rebuild our lives one day at a time.

“We deeply appreciate our IAM leadership, International President Martinez and General Vice President Galloway, and all others coming here to pay tribute to our fallen brothers and affected members. It demonstrates how much the IAM cares about the membership.”

The more than 60 IAM Local 1202 members who work at the Pratt facility make specialized valves for municipal water systems.