Liala Amin is sitting in her art studio at Var West Gallery in Walker’s Point, a neighborhood south of downtown Milwaukee, where she drives to safely escape COVID-19. It’s full of sunlight, next to a patio and serves as her safe haven during a time of uncertainty. Wearing a sweater due to the 29-degree outside temperature, Amin surrounds herself with art hanging on the walls, symbolic of her colorful life. She wears as much color as possible, whether it be her favorite turban or fun earrings, celebrating her life as a multidisciplinary artist.

Furloughed from the Milwaukee Art Museum, Amin can access her studio every day, but longs to return to the place that gave her hope after 141 employees voted to join the Machinists Union last November. 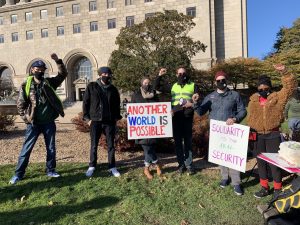 “I really do miss it,” said Amin. “I’m hoping this voice that employees now have will be taken into consideration moving forward.”

Amin had worked in the museum’s education department for nearly five years and knew security guards there had a Machinists Union contract.

“The security guards have a union and receive incredible benefits from it,” said Amin.

Fellow employee Ryan Jann approached one of the guards, Adam Dudenhoefer, who served as the shop chair.

“It was after a crappy day at work and being broke for however many weeks in a row and I just had enough and said ‘we need to do something here,’” Jann said. “He got me in touch with the organizer for our local lodge.”

Warren Enstrom, an Audio/Visual tech, didn’t know that Jann had spoken with Dudenhoefer, when he answered an online message from the guard. Enstrom said that it would be great to have a union and Dudenhoefer said there was another group of employees already thinking the same thing.

“Having the guards on-site allowed us the opportunity to point to a department and say ‘they’re unionized, they receive pay raises every year, they had a voice in how the layoffs were conducted,’” said Enstrom. “By and large, the workers in that department are very supportive of our union and what it does in terms of the contract, the benefits… they really love it and that was really helpful in convincing people to vote yes.” 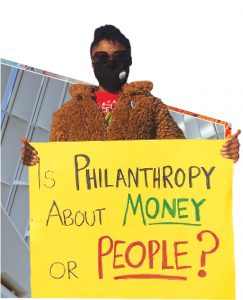 “Adam has an incredible reputation and a wealth of union experience and with his knowledge and support, I was confident from the beginning,” said Walker.

Communication was key, along with an awareness of current events.

“A lot of us were paying close attention to the wave of unionization that was happening in the museum world, so that was our inspiration,” said Jann. “We saw that it’s possible and we pursued it.” The museum assumes that working in a prestigious, world-class institution is enough to make up for a lack of compensation, but Jann and his coworkers disagree.

“We have this beautiful building we get to go to work in every day and even though I’m just a front desk person… I was only making $10.71 for three years before I got the promotion to reception,” he said. Jann says his activism started with the pay.

One of their slogans during the campaign was “Courage is Contagious.” Jann and his colleagues took that courage to a new level and it paid off.

“The thing that makes it contagious is when we’re at a nonunionized workplace, everyone kind of has this veneer of professionalism, and kind of distance, but with unionism, you have to talk to each other and not only are you talking together, you’re strategizing together, acting together, ” said Jann.

Walker returned to work in early March, hoping the rest would follow.

“My hopes for this very essential relationship with the IAM are a more noticeably just workplace,” said Walker.

It takes Michael Graham about 30 minutes to drive home after his day shift. He’s been a hydraulic press operator for nearly 10 years at Lisle Corporation, the Clarinda, Iowa company that manufactures specialty mechanic tools. A colleague, who later became a good friend, approached him and mentioned the Machinists Union.

Graham wasn’t sure how dues worked, but wanted to learn more. That’s a common scenario in “right-to-work” states, where unions exist, but growing membership is a challenge. Sometimes, all you have to do is ask.

After an incident at work, where the union investigated and found that proper procedure wasn’t followed, Graham learned the value of unions, first-hand. “This is why we have a union,” said Graham. 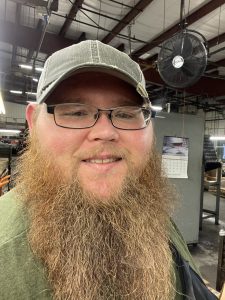 “A lot of people have a misunderstanding, I believe, on what our union is,” he said. “They just run off conspiracies or misconceptions. As a result, a lot of people are skeptical about the union, what it’s about, why it is in place and what it can actually do if set in place properly. If we are strong, we can benefit even more from what it is.”

Graham was so enthused that he joined the organizing drive committee, passing out fliers, going to meetings and encouraging others to do the same, in order to increase the number of dues-paying members. “We’re trying to create a stronger union.”

One-by-one, members are talking to each other, spreading the word about the benefits of the Machinists Union and it’s working.

“If the union is strong,” said Graham, “it keeps the benefits in place.”

You don’t want to produce scrap. Stacey Craig knows that better than anyone, as a Journeyman Patternmaker at CLOW Foundry for 33 years. He’s been working in the trade for 35 years, building patterns for blueprints, prototype tooling and troubleshooting to reduce scrap and make jobs run better.

He says the problem started with management turnover.

“It was odd,” said Craig. “We couldn’t figure out why a lot of salary people were leaving.”

During the last five years, the company hired a new vice resident. The new VP’s attitude is what Craig noticed the most.

“He didn’t really give us the impression of caring for the employees much. He rubbed you the wrong way.”

More and more people quit, including the plant manager and assistant plant manager. Some wages were frozen and little things started adding up. When Craig and his coworkers found out they’d have to start paying for health insurance with little warning, they had had enough. An increase in health benefit costs equates to a pay cut, without a corresponding increase in wages. 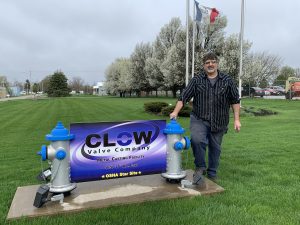 Stacey Craig has been a Journeyman Patternmaker at CLOW Foundry for 33 years.

Some employees worked at Clow Foundry because of the free health insurance.

“The vice president said, ‘Here are four plans you get to choose from’ and basically, they gave us like eight days to choose something,” said Craig. “They didn’t give us any kind of opportunity to do any research.”

“Our sister facility across town is a machine shop. They’ve been union all this time,” Craig said about nearby Clow Valve plant members who have enjoyed the benefits of being IAM for decades. “One of the gentlemen behind the scenes reached out to our machine shop union president over there. We were kind of scared. We didn’t  know what to do.”

Things moved quickly. Local 1498 President Dean Schultz spoke with a few workers and put them in touch with Chris Tucker, a Special Representative with the Machinists Union’s Midwest Territory, who held a meeting with all those interested.

Just a month had gone by between that first meeting in December 2020 and the vote to join the Machinists Union this past January.

“They put a lot of thought into it,” said Tucker. “They wanted this.”

The workers have chosen their stewards and negotiating committee members. Training began in mid-March.

“It feels good. We have a voice and support, so this won’t happen again,” said Craig.

His advice for anyone trying to unionize their workplace?

“Listen to your fellow workers,” said Craig. “It’s just not about you, it’s about everybody… it’s never gonna hurt to talk to a union rep.”

Craig’s commute is only about five minutes. He said half the workers live about 20 miles away. His close-knit group at Clow Foundry knows that they have their  IAM brothers and sisters at the machine shop on the other side of town. Together, they’re ready to fight for workers’ rights and protections all workers deserve.

“Congratulations and welcome to all of our newly-organized IAM members,” said IAM Midwest Territory General Vice President Steve Galloway. “The recognition goes to our organizers, their teams and the IAM activists who helped get each of these campaigns started.

“The purpose of unionizing is not just to help workers in need of union representation,” said Galloway. “It’s also about tapping into workers’ sense of activism – recognizing what drives them – and providing them the tools needed to create real change within their workplace and within their communities.”

The post Member Activists: The Key To Unionizing Workers appeared first on IAMAW.