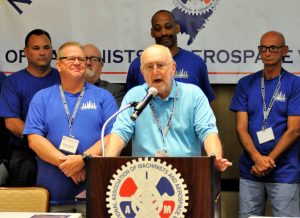 The New Jersey State Council of Machinists (NJSCM) opened its annual conference Monday on a somber note in the wake of the tragic events that occurred in El Paso, TX, and Dayton, OH over the weekend.

“Like most of you after hearing what had happened in El Paso – it was just heartbreaking, we all have families, kids, loved ones, and to get up the very next morning to find there was a shooting in Ohio,” said IAM Eastern Territory General Vice President Jimmy Conigliaro Sr. “At first, it was disbelief that there must be a mistake, and they meant Texas only to discover that in 13 hours this horrible tragedy had been repeated thousands of miles away. Sadly, it has become all too normal in our society.”

The conference featured strong labor supporters from the New Jersey congressional delegation, including U.S. Reps. Bill Pascrell and Donald Norcross, who in 2014 was the first union business agent elected to Congress.

During the conference, IAM Local 1776 Member Cornelius “Obie” O’Brien was presented the fifth annual Frank Darcy Award for Leadership by NJSCM President Ines Garcia-Keim. Darcy was a longtime activist and a skilled machinist. He continually furthered his education in labor and other fields and was active in politics, all with the goal of improving the lives of fellow working men and women.

O’Brien, a 60-year IAM Member initiated into Local 1776 in 1959 as a Ramp Serviceman for the former Eastern Airlines, later going to work for US Air until his retirement in 1991. Early on he was elected as Recording Secretary of the local, a position he held for 45 years.

“Obie has been my friend, and mentor for over 20 years,” said Local 1776 President Rich Howell. “No one deserves recognition for his service, commitment, and dedication to working families more than he does. He has inspired me to remain active, and continue to serve when I retire.”

“I have to thank some very special people who are in this room—my wife, Charlotte, and my daughters, Charlotte, Ann and Donna,” said O’Brien. “If it wasn’t for my wife, who has been my partner every step of the way, none of what I was able to accomplish would have been possible. Every day of my life, I have spent fighting for our members, and I’ll continue to do that until the day I pass away.”