Presidential candidate Joe Biden paid special visits to union members in Minnesota and Wisconsin as he makes his way across the U.S. on his road to the White House.

The former vice president toured the Carpenters Training Institute in Duluth, Minn. Friday, where he pledged his support of working and middle-class families.

“I have a big ambitious plan – that bets on the American worker,” said Biden. “My plan is going to create millions of good-paying jobs building the products and technologies that we need now and in the future.” 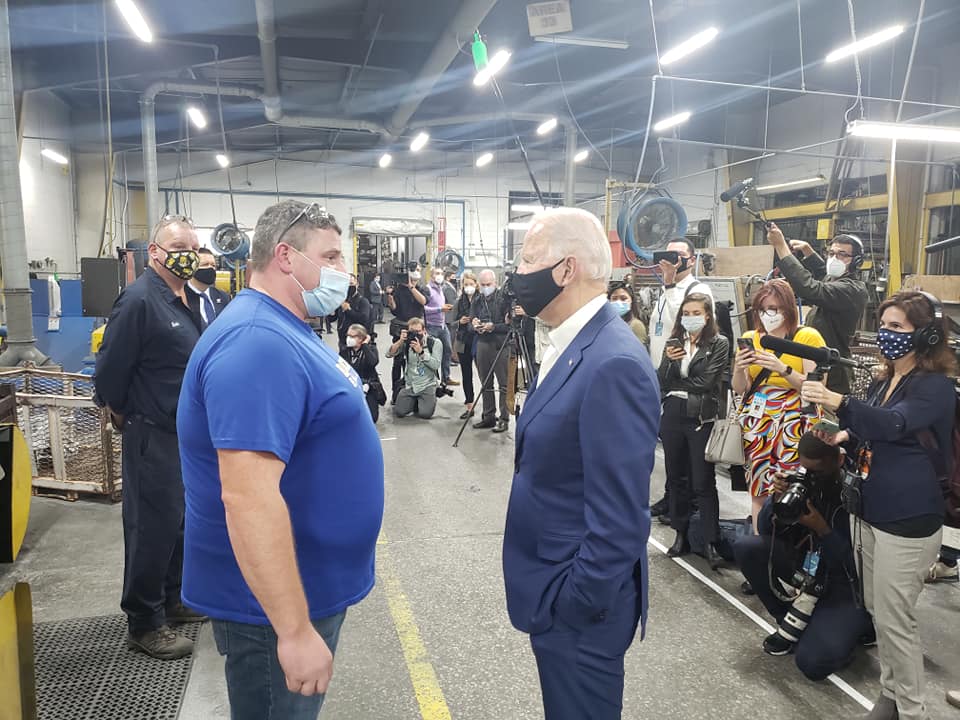 Former vice-president and presidential candidate Joe Biden visits with IAM Local 1260 members at the Wisconsin Aluminum Foundry in Manitowoc, Wis, where he thanked Machinists Union members and USW Local 125/301 for the hard work they do every day as blue-collar, essential workers who built this country and hold it together in good times and bad.

“Comprehensive legislation that strengthens workers,” said GVP Galloway, reminding Biden of the 53 Machinists Union plant closings since the start of President Trump’s term – half of which are in the Midwest, our country’s lack of strong Buy American laws, and the need for passage of the Protecting the Right to Organize (PRO) Act. “Union members who lost their jobs due to Trump’s corporate tax cuts want to get back to work. That starts with a jobs plan that puts American workers first – not corporations, real legislation to bolster U.S.-made products, and stronger protections for workers who want to join a union.”

Biden said that jobs, manufacturing and the PRO ACT were just the beginning of his support for labor.

On Monday, Biden visited with IAM Local 1260 members at the Wisconsin Aluminum Foundry in Manitowoc, WI, where he thanked Machinists Union members and USW Local 125/301 for the hard work they do every day as blue-collar, essential workers who built this country and hold it together in good times and bad.

“Former Vice-President Biden highlighted the great work our members do every day. The partnership we have with management and the USW must be celebrated at a time when far too many companies continue to outsource work to other countries,” said IAM District 10 Directing Business Representative Alex Hoekstra. “I spoke with Biden about the continued plant closings we have seen over the last four years and the requests for assistance that have gone unanswered by President Trump. He promised a real manufacturing plan and tax and trade laws that benefit the working-class over the wealthy.”

“The Machinists Union membership has chosen to endorse Joe Biden to be the next President of the United States and strongly believe he is the candidate who will put working families first and help build back a strong middle-class,” said International President Robert Martinez Jr. “Working people in our country need a President like Joe who will fight to keep their jobs from being sent overseas, and put forth a pro-worker agenda that protects workers’ rights and makes it easier for them to join a union and have access to a safe working environment that’s free from harassment.”