Seventy-seven members of IAM Local 2704, employed by Velan Valve in Williston, Vermont, returned to work Monday after a weeklong strike. The highly skilled machinists manufacture high precision valves for customers such as the U.S. Navy and nuclear facilities.

The members previously rejected the company’s offer over proposed changes to the temporary employee’s language and healthcare coverage. Negotiators returned to the table and were able to reach a new deal to present to the membership, who ratified the agreement the next day.

The new two-year deal features wage increases of 2 percent each year and increased pension contributions, while holding the line on healthcare coverage and costs. Negotiators were able to have the temporary employee proposal returned to the existing language. 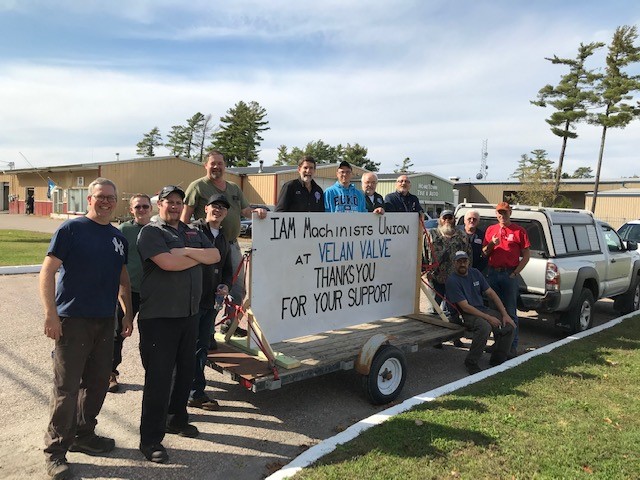 The members of the Confederation of National Trade Unions (CSN) held a rally in front of Velan Valve HQ in Montreal, and shared photos with Negotiators.

“Solidarity made the difference here,” said District 4 Business Representative Dan Loudermilk. “The membership stood strong behind the Negotiating Committee, the community support was tremendous, and the solidarity rally held by our Canadian counterparts was a tremendous shot in the arm for these members.”

“Congratulations to these Brothers and Sisters,” said Eastern Territory General Vice President Jimmy Conigliaro Sr. “The support these members received from their community and other unions was crucial to the outcome, and it demonstrates why we actively support others where they work and live.”